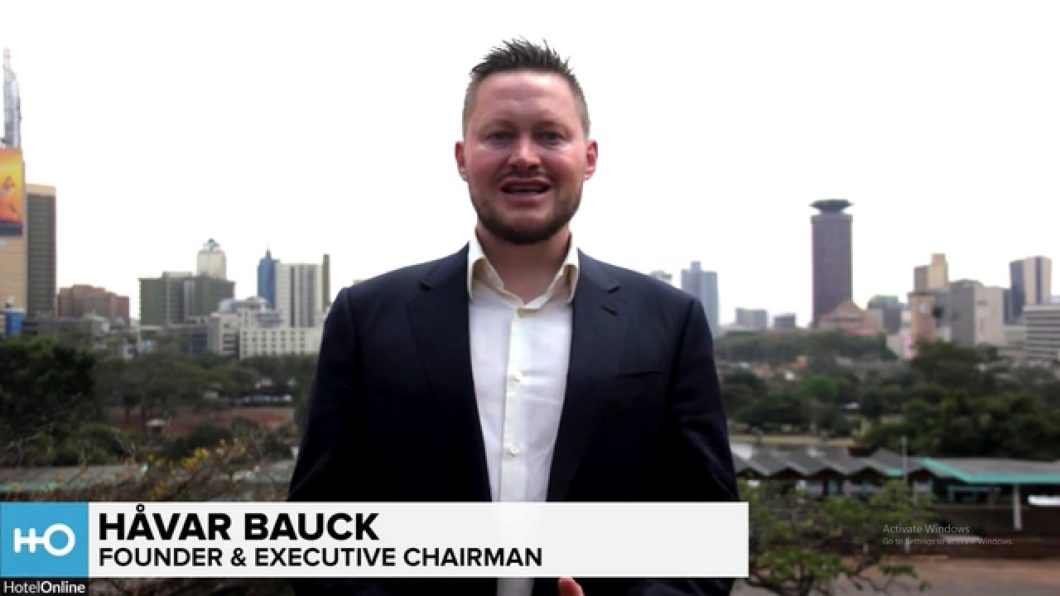 When Håvar Bauck landed in Kenya in 2002, the country was in chaos. The government of outgoing president Daniel Moi was preparing to exit the scene after 24 years in power. It was not clear who would become the next leader and despite great optimism of the future of the country, fear of instability was still evident.

“Kenya was experiencing a great moment of change. When Mwai Kibaki won the election, the country exploded in optimism. I was excited to see Kenya starting to realize its potential. The spirit of ‘yote yawezekana’ was contagious,” notes Bauck who was on a student exchange program through the Norwegian Peace Corps.

For Bauck, there began his great love for Kenya and an exciting journey for sixteen years that has pushed him to developing one of the biggest start-ups ever developed in Kenya that is making great ripples across Africa.

HotelOnline is a technology backed online hospitality marketing platform that allows low to mid-sized hotels in Africa boost their online presence through several packages that expose these hotels to world class reach competing with established facilities.

The platform which was born out of Nairobi’s lack of an affordable accommodation next to Jomo Kenyatta International Airport has grown to be a force to reckon with in the hospitality industry. Since the first business in September 2014, to selling hotel rooms worth USD 80,000 by end of 2015 with 130 partner hotels to selling rooms worth USD 1.7 million in 2016.

But it was not all that rosy as Bauck tells The Exchange in an exclusive interview.  HotelOnline was not a big entity it is today. However, to understand the journey, Bauck took us through a story of his life.

Born in Norway and growing among diplomatic communities that took him to Brussels in the height of Fall of the Berlin wall, and the birth of the European Single Market. This gave him the concept of travel which he greatly enjoys to date. But it was the students exchange program that brought him to Nairobi that changed everything.

Bauck finished his internship and and did not want to move back to Norway.  He aggressively used his contacts for what they were worth to get consulting projects. That kept him going for the first two years. He later worked with different tech startups and scale-ups, all focused on Africa.

For almost a decade, he kept moving between Kenya, Nigeria and Norway. In 2015, he was just about to move to Kinshasa when he left employment once and for all, and went full time on HotelOnline.

His friend Endre, whom he has now known for almost two decades, had moved to Nairobi in 2010, and already then, the ball started rolling.

“Endre was running several quite exciting business projects at the time. I had a full-time job as the regional one-man army for a Greek company contracting with most of the mobile operators in the region. I was basically living on planes and in airports. Hence, Endre and I had a lot to do with the travel and hospitality industry on the continent, but from totally different angles. We were always discussing business ideas, and this is where the idea of a serviced apartments hotel came up.”

Endre was the first to go in terms of business. While looking for a place to live, he came across a ‘very run down’ house in Lavington area of Nairobi. He barely could use the entire house so he thought of an idea of converting part of it into a guest house. Endre knew it was going to be an epic effort to refurbish the place, but he went at it, and turned the place into a quite pleasant guesthouse.  When Bauck’s parents were visiting Nairobi in early 2012, he booked them there, and thus, they became the first guests,” Bauck notes.

The two friends kept their business discussions going, and their attention turned to the fact that Nairobi at the time lacked a reliable budget hotel near the airport.

“We moved in, and looked to exploit the obvious gap. We didn’t have the money to buy a plot and build, so we went for the serviced apartments idea instead at Syokimau.”

“Endre was the one who realised that the domain Nairobiairporthotel.com was available. You can say is aggressive marketing to brand some budget serviced apartments in Syokimau as an airport hotel, but it worked! “

The apartments were fully booked from the first day. The business was booming and they

“We realised our core skills was online marketing and not daily running a serviced apartments. We started offering simple online marketing services to hotels: Building their profiles on Expedia and Booking.com, and taking a commission on the additional revenue we brought in.”

The business has since expanded in many African countries. Bauck as still working full time in the job that kept him traveling. This gave him the opportunity to get in touch with hoteliers in some of the countries he frequented, such as Uganda and DRC.

It was however the birth of his first born daughter that made him cut his African trotting and decide to settle in Nairobi. He reasigned and committed fully to working on his outfit. Two events in the life of HotelOnline have remained etched in the company’s history.

First, Savanna Sunrise, still smarting from its newly found fame engaged itself into merger talks with Nigerian outfit HotelOga. This did not work well but as they were doing due diligence search, they met the owners of a technology company based in Poland. After the collapse of these merger talks, they opted to work with the Polish outfit and merged to form HotelOnline leaving behind Savanna Sunrise.

Then, in 2018 HotelOnline worked on its board buy incorporating Teranga Solutions where perennial investor Eric Osiakwan was a key shareholder.

“Last year one of my investments became profitable, – HotelOnline. I became a shareholder of Hotel Online through a merger that we did which basically resulted in the new business becoming profitable within the year because we combined our strengths which mitigated our weaknesses – the business is now poised for exponential growth and there is also a leading PE fund that is looking to come in this year,” notes Osiakwan.

HotelOnline is growing by the day. They work with online travel agents to boost the income of the hotels in their network.

“Jumia travel, Expedia, booking.com, etc are all online travel agents (OTAs). They are only some of the channels through which we distribute the hotels. We handle the entire online marketing and distribution of our partners, from their official web site, to their profile in the channels you mention, and more,” notes Bauck.

The company is still going strong with new investments in the pipeline. Asked if there are options of closing any deal he said, “If by “closing a deal” you mean selling the company, then the answer is definitely: Not yet. In terms of raising money, several of the current shareholders wish to increase their investments before a potential strategic investor later this year. That’s an ongoing process. If other, new investors approach us, then we can obviously talk to them as well

“In terms of expansion, our current markets already have a combined population of 700 million people! We want to make sure we are the leaders in those markets before we venture into new ones.”

Famous traveltech investor Shravan Shroff has also agreed to join our board. Shravan has made more than 50 investments, and is a co-founder of the Indian angel-backed startup accelerator Venture Nursery. He was the first investor in the now-famous Indian traveltech unicorn OYO Rooms.

Shravan has a track record as a successful cinema entrepreneur in India, and sits on the Board of Dubai Entertainments PJSC, a multi-billion dollar group of companies, managing four theme parks in Dubai.