When in India, you have to travel by train at least once, people say. My trip to Varanasi was pretty much my last chance, and the owner of Madonna Hotel in Delhi had once again gone the extra mile to help.

His driver, Puri, was stepping on it like crazy, panicking through the jammed streets of Old Delhi that afternoon. I reassured him that if I missed the train, I wouldn’t blame him, and that I would explain to his boss that it wasn’t his fault. The idea of me explaining anything to his boss about missing that train, didn’t seem to calm him down.

We actually made it, just a few minutes before departure. Puri got me a train station guide/luggage carrier, slightly reminescent of the ones described in Shantaram. With his help I found the way to my seat  ..in 3rd class!!

I had specifically said that anything less than 1st class with A/C was out of the question. Reassurances that my ticket was “premium” 3rd class, in a sleeper compartment with A/C didn’t make the prospect of that trip any brighter. Anyway, it was too late to complain.

As a “gora”, I was obviously a rather exotic element on 3rd class. The medical student sitting next to me, repeatedly explained that he was only traveling 3rd class because he couldn’t get a flight. He also came up with a half-dozen of business proposals, involving politicians and top academics he claimed to know.

Most Indians tend to advice foreigners to skip Varanasi. Allegedly, there’s nothing exciting there, or anything worthwhile seeing but a bunch of religious fanatics. I had already heard that so many times, I was actually fearing I might be wasting my time.

Arriving at the Hotel India in Varanasi certainly wasn’t an encouraging first encounter. Being kept waiting for 1.5h by hotel staff busy doing nothing, wasn’t my first desire after a traveling overnight in 3rd class.

No one should be blamed for not speaking fluent English in their own country. I might still have liked the hotel better had the receptionist known the difference between “sit” and “please have a seat, sir”!

When I finally got the room, my impression of the hotel, as it was already at rock bottom. Facts like the shower only having cold water and the toilet not flushing, hardly mattered. The room didn’t have any windows, but that was ok. All I needed was some sleep. The two functional light bulbs in the room kept flashing in-between the semi-permanent power cuts. That kept me from noticing how dirty the room was. Not that I cared. All that mattered, was the sleep I so desperately needed!

The good thing with crappy hotel is that you get one more reason to get out and explore.

Varanasi, a.k.a Benares, lacks gigantic palaces and monumental sites. The ambiance is much calmer than most other Indian cities I have visited. The numerous temples in this intensely religious place, are jealously guarded against any tourist who might even think about taking pictures. Strict security measures are in place to keep cameras, and in many places even mobile phones away  Some temples not surrounded by walls, even have guards preventing you from shooting pictures from the street.

After a first sightseeing round, I almost started believing claims of Varanasi hardly being worth the visit. I was about to discover how wrong I was!

Quickly after sunset, the Ganges river turns into a spectacular scenery of religious ceremonies. Some sections of the river bank are dedicated to fire burials. This is where families gather to burn the bodies of their beloved ones before shuffling the ashes into the river.

Religious temples dot the river, and the sound of hundreds of drums and religious chants resonate across the river at night.

By the Dashashwamedh Ghat, the Agni Pooja (Worship to Fire) ceremony, is a vibrant show of fire, drums and incense. Wooden boats full of visitors crowd the river in a scramble to catch this spectacular experience.

The Dolphin Hotel, next to the Ghat, features a rooftop restaurant with a perfect location. Far from luxurious, it offers a decent dinner with a view to the ghat and to the river.

Morning Ceremony – sunrise on the Ganges

By sunrise, locals and visitors alike once again flock around the banks of the Ganges river for the morning ceremony.

In the same waters where the ashes from fire burials were being spread the night before, thousands of people now gather to bathe.

The Ganges river is sacred in the Hindu religion. To the faithful, the immersion in its waters, cleans the spirit and washes away sins.

Medical and religious scholars may disagree about the benefits of these activities. The beauty of the sunrise is beyond dispute, though. The river is again teeming with wooden boats, carrying visitors from near and far.

Besides the ceremonies, Varanasi is mostly famous for its temples. Unfortunately, you can forget about bringing your camera inside most of them.

A key attraction is the Golden Temple (Kashi Vishwanath). Guards search all visitors are thoroughly, to ensure they leave cameras and phones with camera features behind in a locker. Non-Hindus cannot enter the final gate, though, and can only get a glimpse of the domes above the walls.

Many, if not most of the temples are also closed to non-Hindus. That is the case for the Durga Mandir Temple. I nevertheless managed to get a nice shot from the outside, through a fence. Maybe I was just lucky that no guard was around to chase me away!

The Sanskrit University is a key cultural institution in Varanasi. Most tourist guides rank it as a top attraction to visit. Founded by the British colonialists in 1791 to preserve knowledge about the Sanskrit language and philosopy, the University features some beautiful old buildings, as well as a couple of temples. Noting spectacular, but a pretty sight.

Every guide has a “relative” who owns a souvenir shop..

Any guided tour anywhere in India, invariably passes by the shop of some alleged family member of the guide. Be ready for long stories and pictures of some world celebrity who once shopped there! Also brace yourself for ever-lasting monologues about the unique quality of the handicrafts, and how much “their” celebrity bought. Throughout my trip to India, I passed by shops allegedly visited by George W. Bush, Richard Gere, Goldie Hawn, to mention a few.

Unfortunately, I had a plane to catch. At least, was my official story. The guide had more or less coerced me into visiting the shop of his “brother”, who desperately tried to prevent me from leaving.

As I left for the airport, old cars with cloth-wrapped bodies strapped to the roofs, crowded the road. The next evening ceremony was in the offing. Another round of the millennia-old tradition of fire burials by the Ganges river was about to begin.

See my pictures from India here 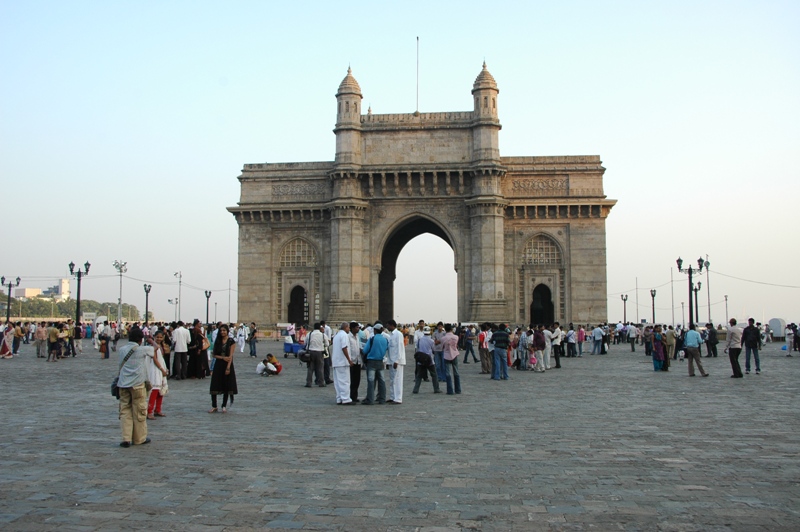